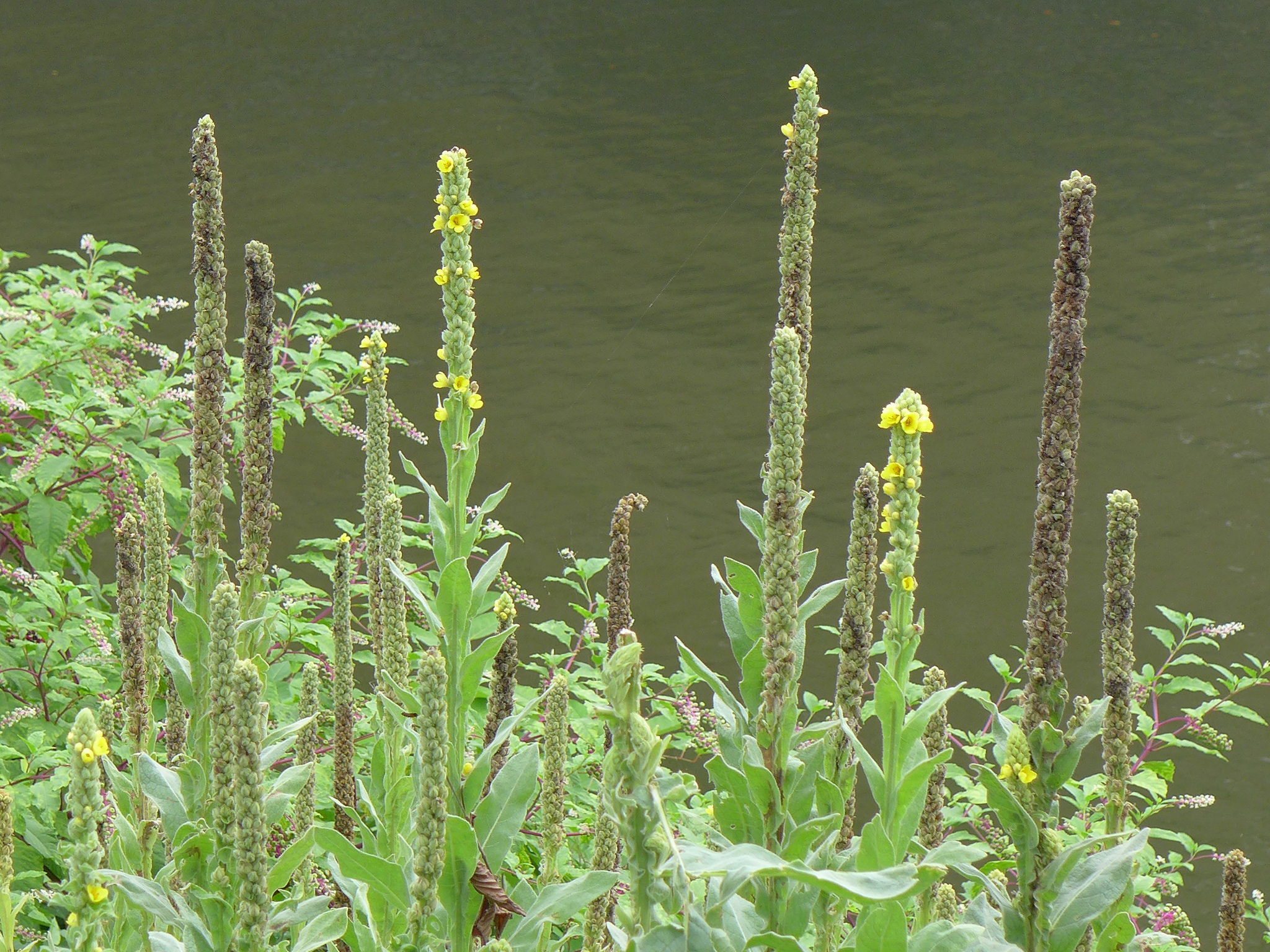 The wonderful gift of mullein is that it grows almost everywhere, and the benefits are a marvel.  Although native to Europe, it grows all over North America as well. In domesticated places like pastures, fields, roadsides, near train tracks, back lots, and alley ways, even parks. But I’ve also seen plenty of it grow in the wild as well. With alternate stemmed, lance shaped leaves that are woolly and soft, they’re unmistakable, especially in the summertime when their bright sunny-yellow flowers are coming out at the top of the spikes.

Common mullein (Verbascum thapsus) grows up to seven feet tall and has a single stem with large, thick, velvety leaves and pale-yellow, slightly irregular flowers. Common mullein is the type of mullein that you will most commonly find in mullein products.Mullein has been used medicinally since ancient times, and its uses and popularity only seem to be increasing as time goes on.

Mullein fights influenza, herpes viruses and some bacteria that cause respiratory infections. Mullein even helps asthma sufferers with its soothing effect on the bronchioles, the smaller branches of the bronchial passageways in the respiratory tract. An oil made from the flowers of the mullein plant is very commonly used to treat the pain and inflammation associated with earaches for children and adults alike.  Mullein oil to naturally treat their dog’s ear infections and other health problems with success. That’s right — don’t forget that natural remedies can be used on your fur babies too! Also, mullein oil is potent disinfectant that can treat both internal and external infections. Internally, it has been known to treat infections in the ears, colon, urinary tract (including a vaginal yeast infection) and kidneys. When applied externally, mullein can help to fight infections on the skin. Traditional use of mullein in its various forms includes the treatment of bruises, burns, hemorrhoids and gout.

Preparations of mullein can be ingested, applied topically and even smoked. In the Appalachia region of the United States, the plant has historically been used to treat colds and upper airway infections. Smoking mullein is used by some for respiratory issues. Dried mullein can be placed in a pipe and smoked to treat congestion in your lungs. However, this is definitely a questionable way of using mullein and if used, should never be done for a prolonged length of time. Plus, smoking mullein is one of the least effective means of using mullein’s beneficial properties. If you’re a smoker and having lung congestion then smoking mullein rather than tobacco can be helpful. Mullein leaves have been applied topically to soften and protect the skin.

Bursitis is a painful condition that affects the small, fluid-filled sacs (called bursae) that cushion the bones, tendons and muscles near your joints. Bursitis occurs when the bursae become inflamed. The most common locations for bursitis are in the shoulder, elbow and hip. To help bursitis naturally with mullein, you can simply prepare some mullein tea and soak a clean cloth in the warm tea. The cloth can then be regularly applied over the affected region, which should help to decrease inflammation.

How To Use Mullein

You can make your own mullein tea at home by combining 1 cup of boiling water with 1–2 teaspoons of dried leaves or flowers and letting the mixture steep for ten to 15 minutes. This tea should be drunk one to four times per day for medicinal reasons. If you choose a mullein tincture then 1/4–3/4 teaspoon is typically taken three to four times per day. As a dried product, 1/2–3/4 teaspoon mullein can be used three times per day. For ear infections, you should follow the directions on the mullein ear oil bottle. Typically, you should drop slightly warmed ear oil into the problematic ear two to three times per day. For ages 1–10, use 1 drop and for those over 10 years old, use 2 drops.

You can buy mullein tea prepackaged, but it’s also easy to make at home if you have some fresh or dried mullein leaves and/or flowers. Mullein Tea: For sore throats, coughs and other upper respiratory issues, brew a strong mullein tea using 1 cup of boiled water and 1–2 teaspoons of dried mullein leaves or flowers and letting the mixture steep for 10–15 minutes. Drink at least 1 cup per day until symptoms improve. Hot Mullein Oil Extraction: Combine 1 cup mullein flowers with 1/2 cup olive oil in a glass double boiler over a low flame. Heat the mixture slowly for about three hours. Allow to cool and then strain using cheesecloth to remove all plant parts. Pour the strained oil into dark glass bottles and seal tightly. Cold Mullein Oil Extraction: A cold mullein extraction can also be made by covering mullein flowers with olive oil in a glass container with a lid, set the container on a sunny windowsill to steep for 7 to 10 days, strain and store in dark glass bottles.

Mullein contains flavonoids, saponins, tannins, terpenoids, glycosides, carbohydrates, proteins, fats and oils. Mullein also contains approximately 3 percent mucilage, which is thought to be responsible for the soothing actions that mullein has on the body’s mucous membranes. Mullein’s saponins are believed to be the explanation for mullein’s expectorant actions.

When used properly and for a short term duration, mullein is highly unlikely to cause any unwanted affects. In general, mullein has no serious recorded side effects. There have been isolated case reports of people developing contact dermatitis from mullein plants. Never use a mullein ear oil if your eardrum is perforated and make sure to consult a physician if symptoms are serious or do not improve quickly with natural treatment. In terms of interactions, mullein has been reported to inhibit the effectiveness of antidiabetic drugs and it may intensify the effects of muscle relaxants and lithium. If you’re taking prescription diuretics, you should talk to your doctor before taking mullein since it can also have a diuretic effect. Mullein products are not recommended for nursing or pregnant women.

Never seen this much water…
Powder Sale 20% Off
Have you visited my herbal website yet? You'll find herbal recipes and information for simple natural health. Who wouldn't want that!
One of the greatest tonic herbs, entire plant is restorative and rejuvenating. Dandelion is a source of a variety of nutrients and the leaves and root contain Vitamins (like A, C, K and B-vitamins) as well as minerals (including magnesium, zinc, potassium, iron, calcium and choline). Learn more and purchase dried leaves in our online shop.
Whole leaf of the European olive. Traditionally, olive leaf has been used for the prevention or treatment of inflammation, infections (such as the common cold, influenza, Candidiasis, urinary tract infections, shingles), diarrhea, allergies, and diseases such as Alzheimer's, chronic fatigue syndrome, osteoarthritis, and osteoporosis. Purchase dried leaves in our online shop.
Tarragon